Environmental water needs for the Daly River Go Back

Governments have a strong vision for future development in northern Australia, including the expansion of irrigated agriculture. However, we need to further our knowledge to understand the ecological impacts of changes to river flows. Making decisions involving trade-offs between the water needs of communities, the environment and future industries is made more challenging without this knowledge.

The need to understand how our river systems work is particularly pressing in the Northern Territory’s Daly River catchment. Most of the Northern Territory’s current irrigation activity occurs in the Daly, and its reliable groundwater reserves and relatively good soils make it a prime candidate for further agricultural development. The Daly River is a unique, perennial river system in northern Australia that supports an abundance of aquatic wildlife, including 90 species of fish and eight species of freshwater turtle. The river is highly valued by the region’s Indigenous people for cultural purposes and as a food source. Furthermore, the river is arguably home to some of the best recreational fishing in northern Australia.

To better assess the impacts of further water development on these values, we need an increased ecological understanding of the river. A priority is the risk of reduced flows during the dry season and understanding the effect on the river’s ecology.

The amount of water within the river, particularly during the dry season, as well as the timing of flood pulses in the wet season, is important for supporting the river’s wildlife, including fish and turtles. This project is determining the water requirements of key environmental assets within the river and improve our capacity to predict the impact of current and future water allocations. The outcomes will inform water policy, water allocation planning and fisheries policy and management of the Daly River.

This project is building on previous research in the river, including research by the Tropical Rivers and Coastal Knowledge (TRaCK) research hub, the NERP Northern Australia Hub and the Northern Territory Government. The project is incorporating existing research, along with targeted research activities including remote sensing, habitat mapping and ecological studies to produce models that explore the relationship between river flows and key ecological assets of the Daly River system.

Where is research happening?

The research is taking place in the Daly River catchment. Field work is being conducted from Katherine township to Nauiyu/Daly River crossing where the impact of dry season water extraction on in-stream flows is predicted to be the greatest. Unravelling the taxonomy and identification of a problematic group of benthic fishes from tropical rivers (Gobiidae: Glossogobius) (scientific paper) 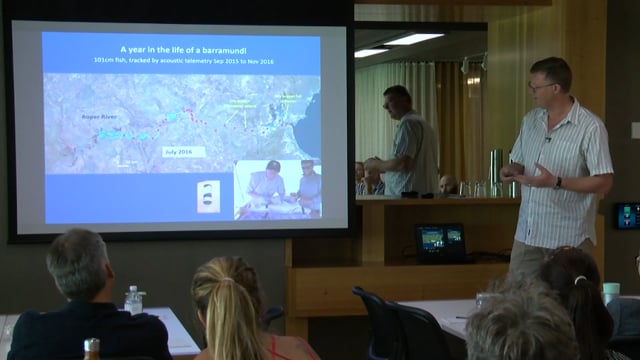 Palaeo-tracers: A brief overview of some chemical tracers used to reconstruct past aquatic environments (presentation Dec 2018)

This project is due for completion in December 2020. For NAIDOC Week 2020, we highlighted some of our important collaborative research with Indigenous people across northern Australia. You can […] Sooty grunter in the spotlight

The Daly River is one of the treasures of the Territory. One of the few northern rivers that flow year-round, […] Two Hub researchers presented their work at the Australian Society of Fish Biology 2017 conference in Albany, WA, which wrapped up on […] Scientists warn we need a strong understanding of the needs of all water users, including the agricultural sector, before major […]